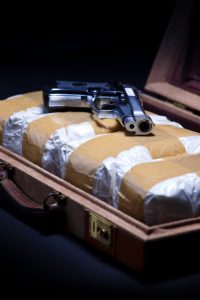 KSL.com reported on March 30 that Salt Lake City police officers seized almost 330,000 doses of drugs in 2016, an astonishing 82 percent increase from the previous year. An officer with the Salt Lake City Police Department told KSL, “We’ve got people coming from not just around the valley, but all over the adjoining counties because it’s so easy to buy dope here.”

Dope can be slang for just about any illegal drug. It seems as though Utah has had no shortage of major arrests involving controlled substances in recent months.

On March 23, the Desert News reported that Utah Highway Patrol (UHP) troopers stopped a vehicle on Interstate 80 and found 100 pounds of marijuana in vacuum-sealed bags a mere two days after holding a press conference to talk about the unusually high quantities of drugs that UHP troopers were finding on the road. Utah Highway Patrol Sergeant Steve Salas said at the news conference that the approximately 110 pounds of methamphetamine seized over the course of two weeks was “about double what we historically seize in the first two months of a year.”

The St. George News reported on February 13 that Garland Police, the Tremonton Police Department, and the Box Elder County Sheriff’s Office seized than 36 pounds of methamphetamine with a reported street value estimated of over $500,000 “sealed in food jars to hide the contents” just off Interstate 15 in northern Utah. KSTU-TV reported last November that a Drug Enforcement Administration (DEA) investigation resulted in the discovery of hundreds of thousands of counterfeit opioid tablets and nearly $1 million in cash as part of an alleged pill manufacturing operation in Cottonwood Heights that was one of the largest drug busts in Utah history.

KSTU also reported on March 28 that a 19-year-old Oregon man was pulled over for driving on the walking path in Hobble Creek Canyon, and a subsequent search of the man’s vehicle resulted in the seizure of 727 ecstasy pills, 2 grams of cocaine, 8 vials of LSD, 47 grams of marijuana, 12 Xanax pills, 22 grams of dab (synthetic marijuana or marijuana hash oil), and $1,120 in cash. The quantities totaled more than 2,200 individual doses of drugs with a street value of approximately $25,000.

The Utah County Sheriff’s Office believed the man intended to sell drugs at the Holi Festival of Colors in Spanish Fork that weekend. The man was charged with six counts of possession of a controlled substance with intent to distribute, three counts of endangering a child, one count of driving with a measurable controlled substance in the body, one count of possession of drug paraphernalia and one count of driving on the sidewalk. The man was accompanied by three juveniles—a boy and two girls—who were cited for possession of marijuana and drug paraphernalia before the mother of one of the girls drove to Utah and took all three juveniles back to Oregon, according to KTSU.

The staggering number of drug arrests in Utah not only illustrates how prevalent controlled substances are in the Salt Lake City area, but also how authorities continue to investigate and enforce drug laws. Rest assured, these types of cases remain a major issue for law enforcement agencies all over the Beehive State.

The Salt Lake Tribune reported that Salt Lake City Police Chief Mike Brown said the jail restrictions implemented by Salt Lake County Sheriff Jim Winder in 2016 intended to help reduce overcrowding at the local jail led to an increase in the number of drug-related offenses and overdose deaths shot in Salt Lake City in 2016. “I think it’s way too early, and frankly impossible, to tell if a single policy about misdemeanor booking restrictions can so affect crime rates,” Winder told the Tribune.

Whether you are a resident of Utah or a visitor from another state or country, any kind of drug-related arrest can create a significant number of legal issues that carry very serious long-term consequences. You should always try not to say anything to police without legal representation.

It is in your best interest to contact a Salt Lake City criminal defense attorney as soon as possible to receive a thorough review of your case. Criminal charges could be reduced or dismissed if law enforcement officers violated your constitutional rights during any search or seizure relating to a controlled substance.

Darren Levitt is a trial attorney and founder and manager of the law firm Levitt Legal, PLLC. As an attorney, Darren works to protect, defend and uphold the freedom, liberty, property, and constitutional and unalienable rights of individuals.